A beloved Winnipeg hockey legend is being honoured today.

A mural was revealed today at 1136 Main Street, on Billy Mosienko Lanes. The mural, painted by muralist Jennifer Mosienko, honours Billy Mosienko, who holds the record for the fastest hat trick in NHL history, scoring three goals in twenty-one seconds during a 1952 game between the Chicago Black Hawks and New York Rangers.

“Most Winnipeg hockey fans know the story of the great Billy Mosienko,” said Tom Ethans, executive director at Take Pride Winnipeg! Inc. “It is with great pride that we honour such a skilled Winnipegger today. Could you imagine witnessing that hat trick?”

“I have been painting murals in Winnipeg for 18 years, this one was very special and an honour to be part of as Billy Mosienko was my husband’s grandfather,” said muralist Jennifer Mosienko. “My two-year-old daughter often referred to the portrait as ‘daddy’ due to the family resemblance. It was a fantastic process learning about Billy Mosienko and his legacy through articles and family with first-hand knowledge. He was charismatic, a true sportsman on the ice and hockey legend with a record that likely will never be beat for the fastest hat trick.” 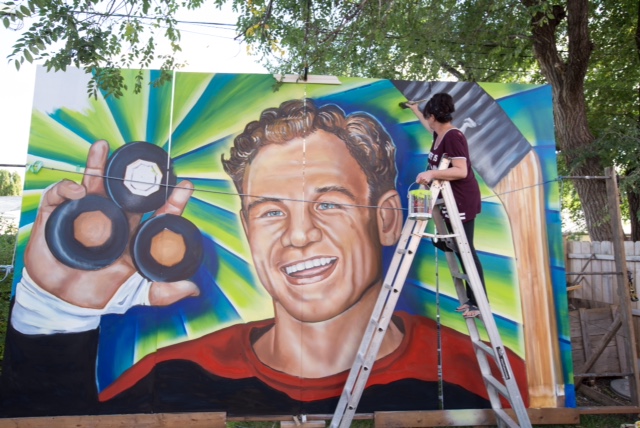 Over 500 murals can be viewed around Winnipeg, made possible through funding partnerships between local businesses, business improvement zones, community foundations and Take Pride Winnipeg!